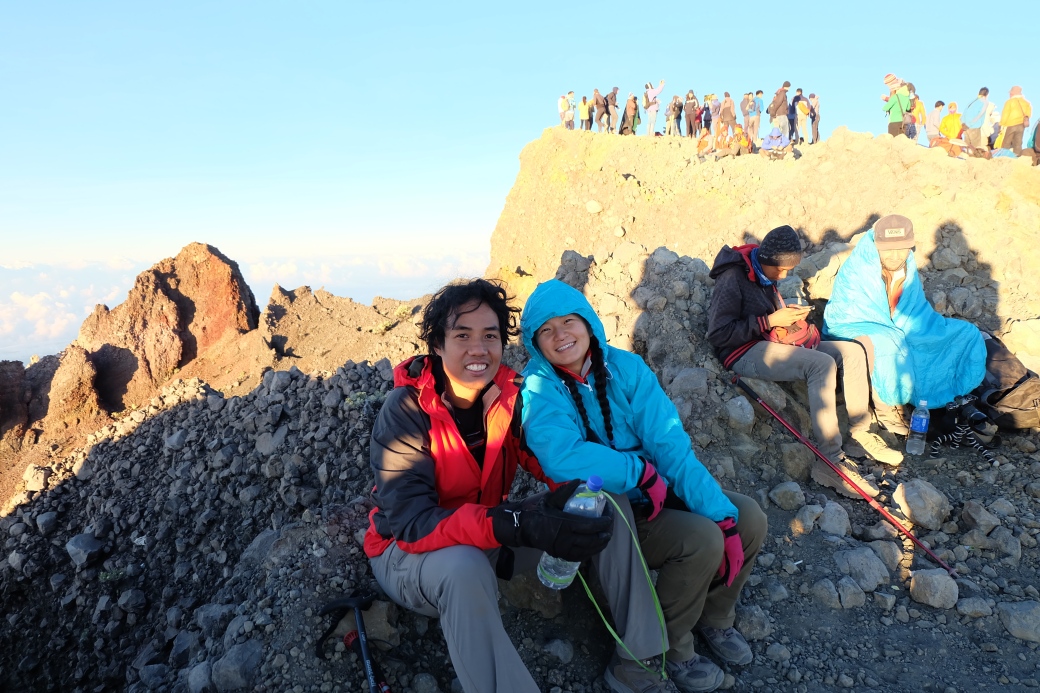 Us at the summit of Mt Rinjani, Lombok – September 2016

Most days, it doesn’t feel that long. And I think, many of the long-term couples might agree that after a certain number of years, you stop counting. I think I stopped after 6 or 7.

But today, I just thought I’d take stock of our relationship. Maybe 10 years is something to celebrate, y’know? It’s about a third of my life that I’ve spent with this guy, right?

The story of how I met my partner

Some of you will be familiar with this story, some of you won’t. But I like telling it coz I think it’s funny and being on my spiritual path now, I also felt like, that moment when I laid eyes on Fadzly for the first time, was actually something big happening.

It was a fine day back in 2006. Probably June or something like that. I was a Temasek Poly student waiting to board bus 23 at the bus stop outside Boon Keng MRT. Walked up the stairs to get to the higher deck of the bus and there he was… In his curly-haired glory and in a white and red TP sports singlet. I believe he was slightly looking down. Yes, I hold on to this memory so dearly because, like I said, I felt that it was an important moment happening in my life’s timeline.

I remember thinking to myself: Mmmmm… This boy is cute. Hahaha!

He was seated in front of his friend. And I remember thinking, “You need to turn around and talk to your friend so I can see your face more!” But he didn’t. Subsequently he also didn’t get down at the main bus stop so I figured he must’ve gotten down at the next one where the sports complex was.

Some weeks later, I was standing near the entrance of the Business school building talking to a tutor. Normally I’m the type to go straight home and I can’t remember why I was hanging around. Who walks in but this cutie with my CLASSMATE. And I was like, “A-ha! They’re friends!”

I actually texted my friend, Cornelius: “Hey, your friend is kind of cute, haha.”
And then of course being the teenage idiot that boys tend to be, he wrote back, “He says you have nice boobs.”

Obviously Fadzly did not say that. Or maybe he did. I WILL NEVER KNOW.

Because this idiot DID NOT see me on the bus. He didn’t see me at the school entrance either.

So this story could’ve been more magical but the fool was not observing his surroundings. Lolol. It’s okay, it does make for a funnier story. I wouldn’t have it any other way.

Between then and now

Sometimes when I place myself back in the moment of my memories, whether in a bout of mental reminiscing or looking through old photos, it feels like the 10-year mark is so far away.

But here I am. About to be married to this man at the end of the year, no less.

The proposal! On Ulsanbawi in Seoraksan National Park, Sokcho, South Korea – April 2014. You can also watch a video of our trip and the proposal here.

I like to think that I’m really lucky. Some couples are meant to be together and they do love each other, but they also have to work hard to be together. I don’t have this issue with Fadzly. If anything, this relationship is the easiest thing to manage in my life. We’ve had our humps (damn you, NS) but largely… I can count on one hand the number of times we’ve actually blown up at each other (I think that’s a grand total of one or two). Of course, we’ve had little arguments and they were always worked out calmly and quickly. 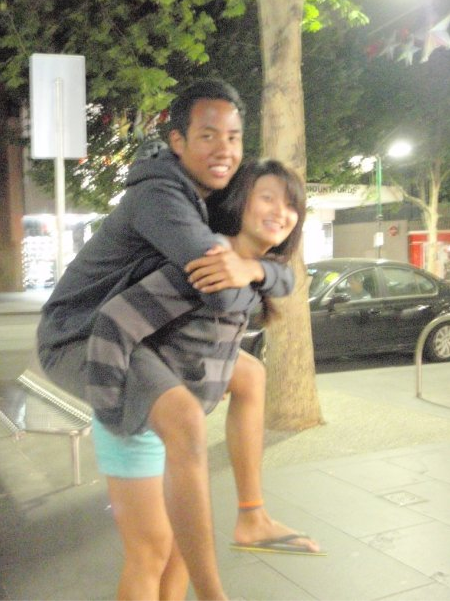 Goofing around in Melbourne, Australia – December 2009

Mostly I’m lucky because Fadzly is super, duper chilled out. I think if he was more reactive, we would have bigger blow-ups and longer silent treatment days. I’ve learnt, A LOT, from him, especially with regards to chilling the fuck out and not giving a shit so much. He’s tolerated a lot of me taking my anger out on him even when he wasn’t even the trigger (like, thank you PMS), tolerated my demands, always was willing to say sorry and make up (even if it wasn’t his fault!).

I know, like I said, I’m LUCKY. And it’s not that he’s a doormat mind you – he just doesn’t have the ego to want to fight for his way, and he acquiesces to make it better for me.

The day I became aware of how I was taking stuff out on him sometimes, I felt really bad and I don’t do it anymore. So I’m thankful that he’s stuck around until the point where I realised myself what I was doing.

HAHA HOW APPROPRIATE IS THIS PICTURE. Location unknown, Singapore – February 2010

He never tried to change me, or ever gave me any explicit advice on how to be a better person. What he did was be his genuine, chilled out, easy-going, flexible self, and I learned by observing him. I remember asking myself before, how is it that we would both be looking at the same situation, and I’m boiling inside and he’s totally cool with it? So, THANK YOU SENSEI. I love you for all the things you were able to teach me when I was with you, just by being all of you.

Fadzly has always been a pillar of unconditional support for me. He celebrated all of my achievements and held me when I failed. Do you know how comforting it is to be assured that no matter what happens, he is standing behind my back? That he wants to see me soar? To see me happy chasing my dreams? That he’ll be there to hug me when I fail, and encourage me to try again? Like really, really, always, always there?

You all know I make it a point to be honest about life – that it’s not easy, that I’m not perfect, that I struggle with many things. But, I truly don’t struggle with my relationship with Fadzly. I almost feel bad that my relationship is this good. Especially when people have a hard time with theirs – it’s difficult for me to empathise. And if you think that I’m bragging here then maybe you don’t know me very well. I truly, am filled to the brim with gratitude, that I have it this good with my man. And how lucky am I to have met him early in my life?

Kayaking along the coast of Santorini, Greece – March 2016

I think the magical thing is that we are extremely similar in the very important things, and different in the things that will help each other to grow. For example, my fiesty, quick-to-anger teenage self needed to learn how to calm the fuck down – I learnt this from him. Fadzly’s super reserved and accommodating personality needed to learn how to express his discontentment and not bottle up his displeasure all the time. He learned how to get angry – even at me. To put me in my place and say cut it out, when it needs to be said. He still asks me to do things like call for the waiter in the restaurant or make appointments over the phone though. Lol. Sometimes I push his butt to do it, sometimes I cut him some slack and do him the favour.

Otherwise, we have the same desire to travel; to live a slow and simple life – though it wasn’t even that way. Until 2009 when we travelled for the first time together to the Gold Coast, Fadzly wasn’t keen to emigrate (which was a dealbreaker for me because I’ve always wanted to move) – but the trip changed him. And I remember when I was an egoistic 20-something asking him time and time again what his dream was and what he wanted to achieve – and there was nothing. I remember getting frustrated at his lack of ambition. Now I know, he’d gotten it right all along.

Pretending to be shepherds in Sibiu, Romania – April 2016

There was a period where I wondered why he had stopped with all of the romantic gestures – it was something that bothered me for a good 2 or 3 years, until slowly, I changed to match where he was. I didn’t need those romantic gestures anymore, and I understood where he was coming from. Not that neither of us are lacking in the department anyway – we still can pull some pretty sweet moves, but it’s not something we both need anymore to keep the fire going.

We were growing at the same pace… I think that was the trick to how easy it all has been. It’s when one person outgrows the other and the latter doesn’t catch up, that I think is when rifts happen. 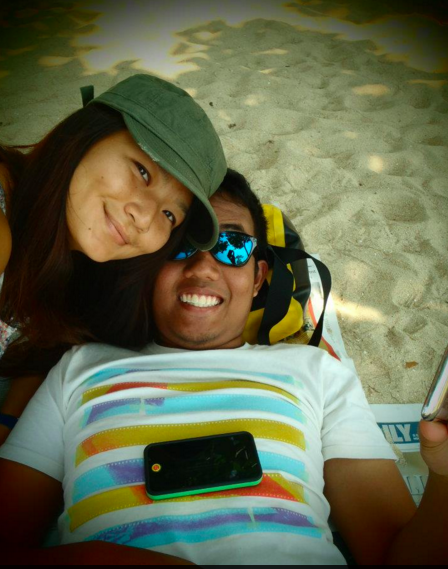 Oh yes, if it’s one thing that I get lots of comments about, is how excited and how in love and infatuated I still am with Fadzly despite how long we’ve been together.

When I talk about Fadzly, and how I miss him because he’s away, how I admire him so much and how excited I am to see him on his off day, or to travel with him, and etc. People seem to be pleasantly surprised to know that I still get the butterflies in my tummy even after 10 years.

We still text each other goodnight every night and good morning every morning. I remember we talked on the phone every night for about 4 years of the relationship.

Us appearing in the Straits Times for a story on unique ways of creating travel memories. Singapore – February 2015

It’s hard to describe the closeness and ease in which I feel when I’m with Fadzly. The best way I can try, is to say that I know that Fadzly and I, as souls, have travelled together in many lifetimes – not just as partners but as siblings, friends, and etc. Try to imagine being with someone you’ve known since forever. That kind of stability, that kind of trust, that kind of comfort, the kind of knowledge that you don’t need to try anymore… It is a blessing he has chosen again to travel with me in this lifetime. Whenever I think of this I feel a deep, deep bliss, gratitude and joy in our companionship. 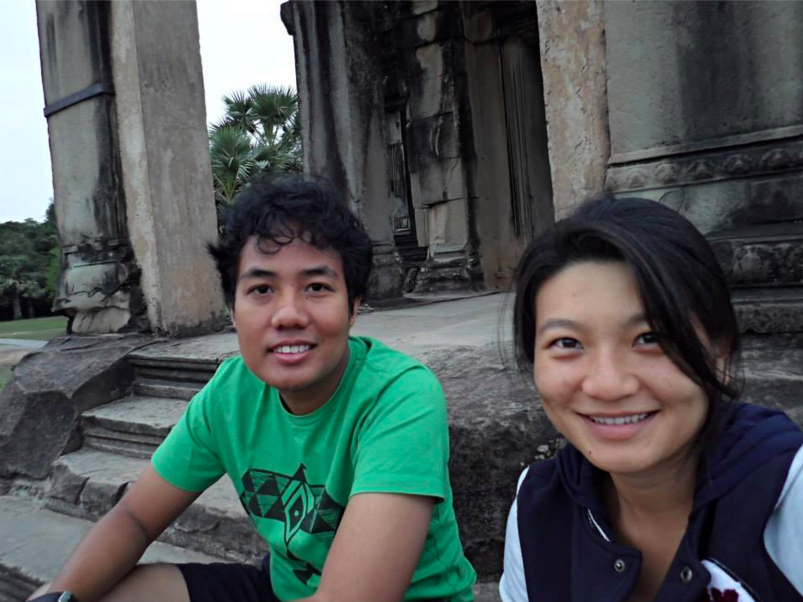 Catching the dismal sunrise at the Angkor Wat in Siem Reap, Cambodia – December 2013

Of course, the one thing which many of you know, is how I’m not converting to Islam before marrying Fadzly. Again, I’m lucky. That he’s not religious, that he decided around 4 years or so into the relationship that he wasn’t going to push me to convert if I couldn’t embrace Islam. This was at the risk of cutting ties with his family and his community. I am always incredibly appreciative of that offer. I will stand by him wherever I can during this time as he tries to invite his family members to our wedding.

So, tomorrow as we celebrate our 10th year together in this lifetime as a romantic couple, we are also attending a ceremony to honour our union. It is going to be done in the presence of my spiritual community (another thing I’m so thankful for). And I really appreciate how Fadzly is willing to do this for me because it’s important to me, even though he doesn’t have any strong spiritual beliefs.

I have to write my vows and I think I would also want to write a speech of gratitude, for everything that this man is to me and has done for me.

Thank you for sharing experiences and creating memories with me. At Balea Lake, Sibu, Romania – April 2016. A video of our East Europe trip is here.

I love you with all of my physical and spiritual self.