I bought this super cute reflection journal from awesome stationery store Kikki.K for use from the start of this year. It basically gives you a sentence to complete, or a question that you have to answer, every day. The journal is supposed to last three years and the aim is to see how you or your circumstances change during the three years. Check it out here.

It has been really interesting filling it out and I thought it could inspire blogging topics as well. I won’t actually be posting a sentence a day – I think that would be too difficult to maintain. Haha. So without further ado, here is the topic for today! 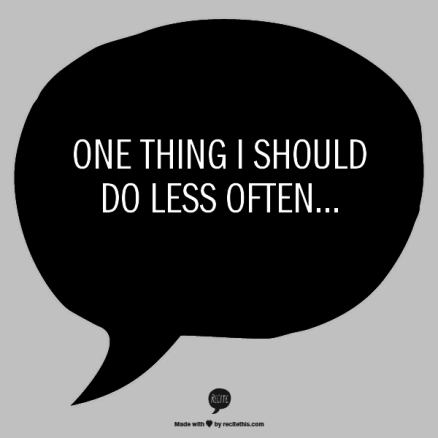 My answer would be… Nag at Fadzly.

Hahaha. Okay, before you think it’s some petty thing that women do. I’d like to explain more and I really hope you’ll read the entire entry.

Okay so I love her with all my heart, but my mother is a bit of a control freak. She’s the kind that waits by kitty’s litter bin to pick up the poop and pee immediately after he’s done, and give his bum a little wipe – WITHOUT FAIL (much to kitty’s annoyance). She’s the kind that mops and sweeps the house every single day after work because she can’t stand dust on the floor. She’s the kind that shuts all the windows in the house, making it absolutely stifling, because the neighbours are cooking and the smell fills up the house – she even gets mad at them! I mean, really? You may think it’s a clean-freak thing, but really she is trying to control things that shouldn’t need to be controlled. The cat’s poop and pee can sit in the litter for a while, nobody’s going to die.

As a parent, she’s the type that would forbid you from doing anything risky or out of the norm – like me being jobless for a few months now and using my limited savings to travel. Cue “You cannot be sitting at home like this, you should find a job and make lots of money at this age!” lectures. Of course, I understand this mindset developed from her own growing-up experience, but it’s still hard to deal with.

You know the quote, “The ugliness you see in others is a reflection of yourself”? I’d always wished she would loosen up and not control everything so much – she’d be less stressed out. I voiced it out and tried to make her let go. Then it hit me – I was trying to control her too. I was trying to make her see “my way” because I “think” it’s better for her.

Which brings me to my point (thanks for staying with me). Growing up my whole life under this subtle but persistent influence, I emulate this behaviour. I realised I was doing the same to Fadzly.

“Don’t lie down on the floor if you’re sweaty!”
“Flush the toilet only when you’re done!” (Do all guys do the whole “push the flush while peeing and hope to end both simultaneously” thing?)
“Put your shoes on the floor mat! Not the floor!”
“Don’t do this! Don’t do that! Don’t buy this! So expensive!”

Therefore, one thing that I should do less often is nag at him to do things the way I think it should be done. He recently asked me if it was okay to buy a $680 helmet (it was time for a new one). My initial reaction was to flip out at the price ($680?!?!!) and tell him to absolutely not buy it. But then I remembered my realisations, and I gave him my opinion: that it is an incredibly expensive helmet. But I told him that if he thinks he has the cash to spare and it’s worth the price then he should decide himself whether or not he wants to get it – I wouldn’t interfere in his decision and support whatever it is in the end. If it ends up being a mistake, it’s a lesson he’s suppose to learn and I should not be in the way of that.

Moving forward I’m trying to learn how to let go, especially of the little things. After all, just as I hate being stifled by my mum’s micro-management, I shouldn’t do the same to others – especially a loved one.

So, tell me! What is the one thing YOU should do less often? I’d love to hear in the comments below :).

Met up with a good and wise friend Sasha yesterday for dinner and I introduced her to Paik’s Bibim. It is a Bibimbap chain from South Korea that was started by a Korean celebrity chef.

We both had the Marinated Tofu Bibimbap ($6.90). You can stir in some Korean gochujang (a bottle is placed on every table) if you’d like – I personally love adding it to give the dish a stronger, sweet taste. I like that you get a ton of vegetables in this dish to keep you full, and some protein in the form of soy-sauce (I think) marinated tofu cubes. Everything was really fresh-tasting – at a reasonable price of $6.90 I would come back for this. I do like the tangy pickled radish kimchi too – went for a second helping at the counter. It is only a tad spicy, if you’re wondering.

The last time Fadzly and I were here, we had the Beef Bulgogi Bibimbap – tender, flavourful beef slices sat atop Korean rice, surrounded by cut-up leafy vegetables that I couldn’t identify. It was delicious but I wish they’d served the standard array of bibimbap vegetables. I would personally prefer that I guess. Though, on another note I have started going vegetarian so I suppose it is unlikely I will order the beef bulgogi one again.

It is June 18, 2014. This website is finally good to go. I decided it was easier to direct editors/publishers towards a website containing all my writing samples instead of choking their inboxes with large attachments.

It also gives me my very own platform to pen my thoughts. So if you are here, I hope you enjoy my musings.

Do note that all food review posts are recommended – if it’s on here, I liked it, and you should try it.

You might see the name “Fadzly” pop up here and there. He is an other half that I’ve been seeing for many years now. This is the introduction so you don’t get confused when reading the entries.